Lucas is finally starting to take some positive steps forward. On Saturday night, he had to use nasal oxygen to keep his oxygen level over 90%. From 5
am on, they started to reduce the percent of oxygen support.  By noon, Lucas was off of oxygen support. At 3pm, he was doing so good that we received the approval to let Lucas walk around the floor. He was in heaven. He kept smiling & laughing!  Off and on for 2 hours, Lucas walked all around the ICU floor. No one could believe this was the same baby who was on a ventilator 24 hours earlier. He was a bit wabbley when he walked.. But he loved every minute!

Throughout the day, he drank 3 bottles of formula of 105, 120, & then 170ml. The 170 bottle was all asleep in 15 minutes with no breaks at all which is a huge improvement due to the dilation success. Then, he threw up 3 times on me afterwards. 😦 The doctors believe the stint is causing the stomach valve to remain open so his reflux pushes the food back out. But we’re focusing on the positives that he is making good strides! They also started TPN to give him all of the needed nutrients since he only wants to eat every 4 plus hours and not enough at a time yet. He is in much better spirits and is starting to somewhat look like his old self. He still moans from pain. We may get out of the ICU tonight or tomorrow morning.

BTW – His tracheomalacia is really loud. The trachea is causing all of the breathing problems. 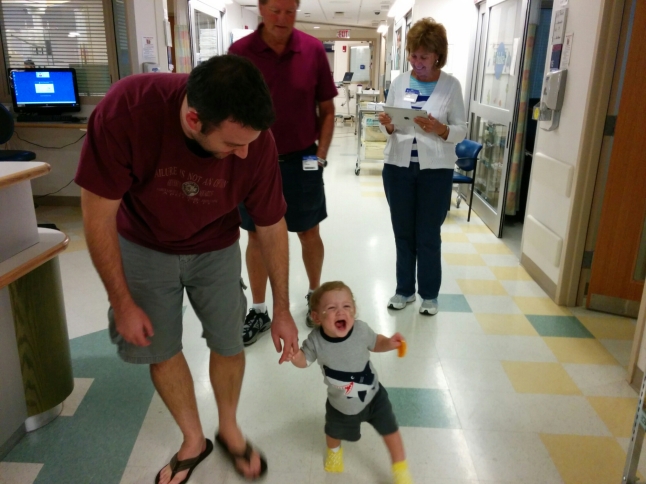